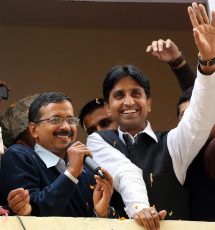 So, I wrote this one long way back before the Delhi Elections-Round 2!

Today, I was going through my old articles and found this, hence, I thought to post it. The post is a political satire and is just for fun.

With the coming second Delhi elections, the pressure seems to be risen up for AAP leader, Arvind Kejriwal. As the Nation witnessed the appointment of AAP government in the capital replacing the long serving Congress government, Arvind Kejriwal became the hero of the nation challenging the apparently youth icon, Rahul Gandhi and the real life Kevin Spacey of House of Cards, Narendra Modi.

Arvind Kejriwal who became the villain from hero just like Harvey Dent of Batman Series when he resigned as the chief minister of Delhi, leaving the capital under governor rule and destroying the ‘free water and electricity’ hopes of the people. As the elections are nearing, ‘against Kejriwal’ campaign had already started before ‘for kejriwal’ campaign. It seems that BJP are not only in the mood to clean India but also to clean every other political party.

Radio advertisements hit hard on Kejriwal’s feelings calling him fraud and cheat. But, former IRS select is ready to fight again against everyone especially those who soon left AAP after their debacle in the Lok Sabha elections.

With BJP more active than the January Transfer Window in Football, as they have signed new players in the team with the likes of Kiran Bedi and Shazia Ilmi, they are ready to take away Delhi as well after sweeping many states. Kiran Bedi has been named the CM candidate by the BJP and it has now become IPS vs IRS.

Arvind Kejriwal, who after watching Batman Series, has recently finished watching four seasons of ‘Game of Thrones’. He is so much inspired by the character Tyrion Lannister that he has announced worldwide that he wants to fight for the chair of CM by trial by combat, little does he know that Kiran Bedi could name Amit Shah to fight from her side and all the hopes of AAP and Kejriwal could be buried as Kejriwal wants Kumar Vishwas to fight for him in the battle.

Kumar Vishwas had already challenged Rahul Ghandi in the Lok Sabha elections, where he was pelted stones when he entered Amethi city. Reportedly, he has come up with a new plan to win this battle as he would recite ‘Koi deewana kehta hai’ again while fighting tentative fighter Amit Shah in a Sumo Wrestling Match which would decide the winner of Delhi Elections.

Meanwhile, Rahul Gandhi and team who are chilling in some galaxy far far away….. which no one knows, uploaded a video. In the 4 minute video, Rahul Gandhi explained RTI, bashed Arnab Goswami, called Modi dictator and while drinking Bournvita, yes bournvita which he clearly mentioned and watching Pogo in the background, he agrees to the proposal set by Kejriwal.

One thought on “Kejriwal demands trial by combat against Bedi”