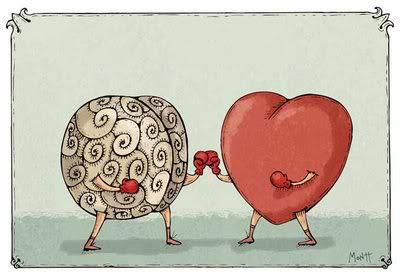 There are so many battles fought on this planet since thousands of years. Hundreds and thousands of years ago, the battles were fought using arrows and swords and then came the guns and modern machinery to Nuclear bombs and it’s revolutionizing day by day. But, which was the biggest battle fought till date? Well, the answers would obviously vary and I don’t believe there will be an unanimous answer. But, there is, there is one battle which every person has battled, from which every person is affected. It doesn’t involve any chemical warfare or machinery because it’s the battle of your Heart and Brain!

I don’t know the psychological aspect of this battle or difference but if you are stuck somewhere in your life for anything, the battle will start. The battle of Heart and Brain is faced by every person living on this planet. For some, it’s too big and for some it’s too small, but the battle to decide is always there.

Recently, I was caught in such battle and it was really really tough to decide what to do further, my Heart wanted something else and my Brain something else. The difference of opinion is caused by the Emotional trait of the Human Beings. Every Normal person has an equilibrium between Emotion and Logic, but at the time of crisis, a person has to decide one between these two and that’s the most toughest and meanest decision because one way or the other, choosing one affects another.

Most of us work logically, we tend to solve the problems logically and not by what our Heart says but when the emotions kick in, everyone of us forgets the meaning of Logic. Well, this generally occurs when another person is involved and when another person is involved-emotions are involved and when emotions are involved-the crisis happens! I still try to tackle any situation and problem logically but obviously, that tiny little heart doesn’t want me to take decisions so easily. I believe it happens with everyone as well.

It’s not that you should ignore your emotions, but an equilibrium is necessary and more importantly, we should see the picture far-far away because logical decisions take care of it unlike emotional decisions! Nevertheless, whatever decision you will take, one will suffer, so make it worth it.